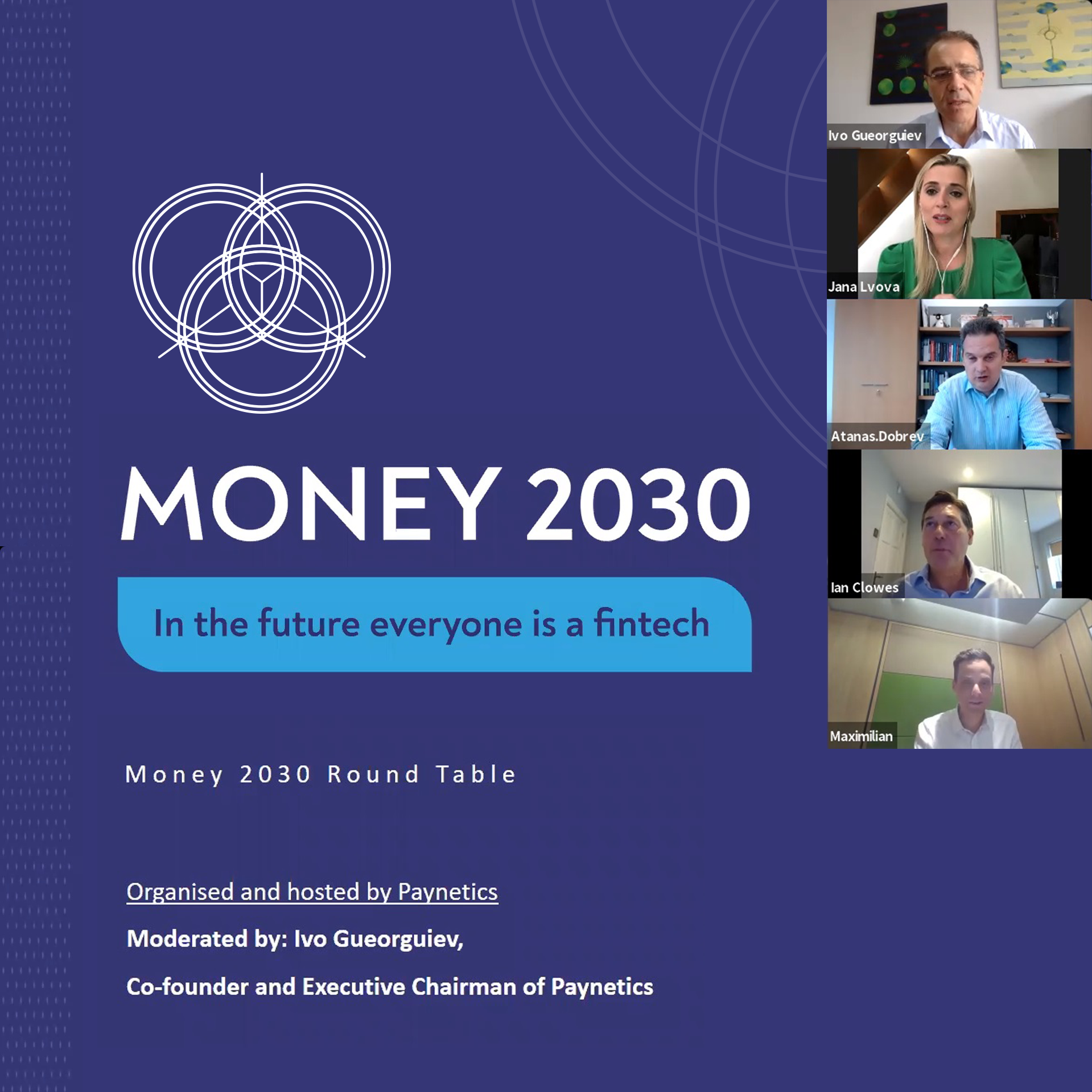 We recently held our first round-table event on the future of fintech, which we called “Money 2030”. The session was focused on what fintech and financial services might look like in ten years’ time. We were joined by senior executives from across a range of different sectors, including telecommunications providers and other non-financial services companies, which have launched fintech services for their clients; investors and advisors which are actively working in this space and fintech and technology companies which are building the platforms to enable innovation. We assembled an expert panel of speakers for the event, which included Atanas Dobrev, CEO of Vivacom; Ian Clowes, Director of FS Horizons; Jana Lvova, Head of Fintech for VISA Europe; Maximilian Schausberger, Managing Director of Elevator Ventures. Our very own Executive Chairman and Co-founder Ivo Gueorguiev moderated the event, but he wasn’t spared questions from the wider audience either!

What does financial services look like in ten years' time?

We started by asking our panel what one prediction they had for how financial services might look like in ten years’ time. Elevator Ventures’ Maximilian Schausberger brought an international perspective to his contribution, noting that the Chinese are currently leading the way in the platform business, with AliPay and Tencent establishing themselves as data collectors in all areas of consumers. Visa’s Jana Lvova predicted a future that included more seamless consumer services, which would give consumers greater control. She highlighted services like subscription management as an example. Lvova also noted that cash will play an increasingly smaller role in consumer purchases, forecasting that around 5% of transactions will be cashless in the UK by 2030. Real-time financial services, facilitated by open-banking and cloud-based technology, is the future that Ian Clowes of FS Horizons envisioned. And technologies like quantum computing and APIs will play a bigger and bigger part in the provision, and protection of, financial services. The theme of cashless payments was picked up by Atanas Dobrev of Vivacom. He believed that cashless payments via smart devices, including biometrics, will inevitably take a share of the market from cash, cheques and plastic cards

What role does open banking play?

We had some great questions from the wider steering group, including Charlie Craven from Ecospend, an open-banking provider. He asked our panel what the infrastructure of open banking will look like in ten years’ time Expanding on his theme from earlier in the discussion, Ian Clowes from FS Horizons replied that the adoption and future could be SEPA Instant (Single Euro Payments Area) to facilitate real-time purchases. He explained that there’s still work to do to “bed down” the banking rails associated with this, but the volume will come in future. Jana Lvova of Visa agreed, saying that while it will take time to build the structures needed to fully support all the innovation that open banking can facilitate ultimately it’s “here to stay”. She added it won’t just be regulators that propel this process forward, but also commercial opportunity for banks and new market entrants.

Given the provenance of Paynetics, it’s perhaps unsurprising that there was a question from Visa’s Oana Neumayer about the differences between Central and Eastern Europe’s fintechs compared with the rest of Europe. Our Executive Chairman Ivo Gueorguiev said that it’s clearly a two-horse race in Europe. He believes that the CEE is developing high quality fintech capabilities; with a young, innovative, can-do mentality. Gueorguiev noted that other countries in Europe have much more legacy infrastructure which can create inertia - Austria, Germany, Italy have lots of regional banks and the UK has building societies. At the same time however, CEE fintechs lack the same level of access to capital compared to start-ups in the western part of Europe. There is also still a much higher credibility hurdles CEE fintechs need to clear. Maximilian Schausberger from Elevator Ventures noted that the adoption of cashless technology is higher in CEE, thereby offering greater potential for serving underbanked consumers in the region. Jana Lvova of Visa agreed, pointing to the huge adoption of contactless payments in the Czech Republic, Slovakia and Poland.

The role of "Big Tech"

The discussion moved on to what role “Big Tech” firms like Google, Amazon and Apple might play in financial services in the future. Vivacom’s Atanas made a strong case that Apple, for example, could potentially make an impact on this market. He pointed out that Apple has more capital and more trust than any bank, and if it wanted to buy Goldman Sachs, it could do so easily given its cash pile. But there are points of friction, such as the bank’s support of Apple Pay, requirements for a banking license and an EMoney License (EML) along with the wider regulatory and capital requirements for banking. There were other barriers noted by the panel, including compliance, lower returns on equity than Big Tech may typically seek, and the lack of a clear way to collect and then monetise data from banks, given that the business model of Big Tech is based on data. Ivo Gueorguiev did note some benefits that the involvement of Big Tech in financial services has driven, however. He stated that Paynetics used to have a time-consuming know your customer process, but the business now relies on an Amazon product for this, which has helped massively improve speed and cost. We wrapped things up by asking the panel for some of the key technologies that they saw having an impact in the future. A number of different technologies like biometrics, block chain, quantum and cloud computing were mentioned. But Atanas Dobrev of Vivacom summed this up well when he said “the transformational technologies of tomorrow exist today. It’s about what will make money”. This was the first event of its kind that Paynetics has held, but please do look out for future Money 2030 events which we plan to host in the coming months.